Day trip to Pompei and Mount Vesuvius from Naples

Excursion from Naples: Pompei and Mount Vesuvius daytour.  Visit the Archeological Park  with an English-speaking guid and discover the domus, streets and the shops remained intact through centuries of time. For lunch we’ll stop ad local winery. In the afternoon visiting the Crater on Mount Vesuvius.

In 79 A.D. the city was completely buried by the eruption of the Vesuvius volcano, stopping time. Today it is still possible to walk among the Roman domus, the shops and the skilfully built streets, giving an immersive experience and the feeling of living for a few hours in that distant era.

The excavations began at the behest of Charles III of Bourbon and are considered one of the best testimonies of Roman life. Many of the finds, such as furnishings, frescoes, mosaics, and statues, can be found in the National Archaeological Museum of Naples.

The site ranks is third in terms of number of annual visitors, only after the Colosseum and the Pantheon. 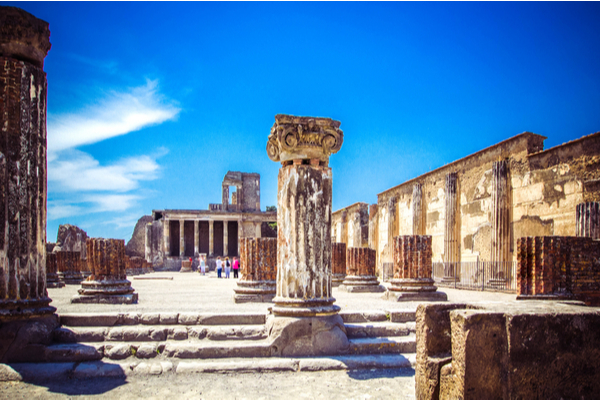 An unforgettable tasting experience combines the land and its traditions in a flavorful whole, beginning with a guided walk through the vineyards on the slopes of Mount Vesuvius overlooking the Bay of Naples, Sorrento, and the Island of Capri.

Afterwards, we’ll tour the winery where the Lacryma Christi DOC is produced, and end sitting down for a wine tasting, paired with samples of local specialties from our little corner of paradise on Mount Vesuvius.

Tasting menu with antipasto appetizer, spaghetti tossed with a sauce made from heirloom Piennolo tomatoes and basil, Pastiera Napolitana, a traditional dessert.

With our driver we’ll arrive up to Mount Vesuvius, one of only two active volcanos in Continental Europe. It stands about 1281 meters tall, with a symmetrical central cone and steep wooden slopes.

Visiting the crater is a must, and tourists from across the globe climb the path each year to peer into its depths.

This tour is available every day, booking at least one week in advance is required. Price for person.

To ask more write us > WhatsApp or fill the > Contact Form
Our travel specialist will answer you in short time!